Close Menu
West Palm Beach Bankruptcy & Business Attorneys > > Bankruptcy in Florida > What Is in a Contract?

What Is in a Contract? 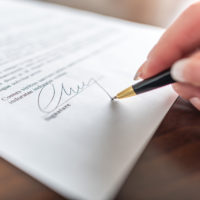 Believe it or not, it is very likely that you will enter into countless contracts throughout the course of your life. At its core, a contract is a legally binding agreement between two or more competent parties. However, contract law is a bit more complex than that.

A formal contract is not the end-all be-all. There are several different kinds of contracts that one might come across, and most of them need not be documented in writing to be made valid — though doing so is always advisable.

Contracts and the Law

Laws for contracts vary from state to state, but ultimately will be governed under one of two types of state law: common law, derived from applicable court precedents over the years, or the Uniform Commercial Code, which outlines the laws of commerce. When a contract is breached, or broken, one party will likely file a lawsuit against the other to have the contract enforced. Typically, the filing party seeks monetary damages in court. An alternative to court proceedings is seeking out the help of a mediator to resolve the dispute.

While some contracts, like a billing agreement with your cable company, might not necessarily need the oversight of an attorney, there are certain times when the expertise of a business litigation attorney in West Palm Beach is invaluable. If you have questions about a contract, call the team at Kelley Fulton Kaplan & Eller today.