The Basics Behind Legally Valid Contracts 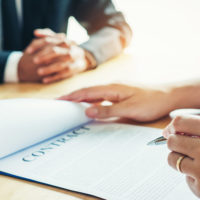 While most contracts are often times filled with legal jargon and complex terminology, the most effective and successful valid agreements are straightforward and simple. There are two requirements that need to be met in order to enter a legitimate contract: both parties signing the commitment must agree with the offer (“mutuality of assent”), and one value must be traded for another (“consideration”). The contract will be seen as legally binding in the eyes of the court if the following is true: there is mutuality of assent and consideration, the valuables exchanged are sanctioned, and both parties are able to enter the contract according to the law.

First and foremost, it is imperative, that both parties need to be in agreement on the terms proposed in the contract. Occasionally, due to unclear stipulations, there can be some gray area between the idea of a potential agreement and an enforceable agreement, known as borderline cases. The court has rules to help define a legally enforceable contract.

A contract legally exists in the eyes of the court once one party makes an offer and the other accepts it, which can be done either verbally or written. The most important point is that all terms of the offer must be agreed upon. An important point to note, a party has the ability to counteroffer and amend any of the offer terms as they see fit.

Unless there is a pronounced expiration date, once an offer has been made it remains open for a “reasonable” amount of time, a period that is subjective and depends on the type of business and situation. Our business attorneys always suggest including an expiration date within a contract, as it eliminates any doubt as to the date or time by which the other party will make a decision.

There is also the option for one party to revoke their offer, so the best practice is to thoroughly review the contract with an attorney and formally answer as soon as possible. The party that chooses to revoke their offer can do so as long as it has not already been accepted by the other party. For instance, if the other party decides to think the agreement over or attempts to change any terms, the offer can be withdrawn. However, if the deal has already been accepted, it becomes a legally bound agreement.

Contracts that include an expiration date are known as options. For example, if someone is offering to sell a home and the other party requests a certain amount of time to think about the offer with the assurance that the seller will not withdraw the option, the seller may ask for money to cover the expenses of taking the house off the market. Thus, they are paying for the option to accept the contract at a later date.

After an offer has been made, one party will typically negotiate the terms of the agreement, called a counteroffer. The opposite party has the choice to either accept, decline or make another counteroffer. Small differences in a contract cannot be relied upon to void a legal agreement, which is why soliciting the help of one of our expert West Palm Beach business attorneys will ensure that all details within the contract are acceptable and agreed upon.

In addition to both parties consenting to the terms of the contract, the agreement is not legally valid unless an exchange of goods or services is being made before the completion of the contract.

The promise to exchange something of value within the contract, such as an item or service, is called a consideration. Once both parties accept the terms of the contract, the items or services promised will be exchanged, and only then will the contract be legally valid. Additionally, doing work can also satisfy the exchange of promises. For instance, say someone left a voicemail agreeing to pay $50 more if his shoes were repaired a day early. If the shoemaker called him the next day to let him know they were ready early, the owner is bound to pay the extra money and cannot back out of the deal.

Talk to a Lawyer

Our West Palm Beach business contract attorneys usually suggest written contracts over oral ones, as the latter can be harder to enforce in court. There are a few situations where legal contracts are required be on paper to be enforceable, such as with real estate transactions or agreements that are ongoing for longer than a year. Individual state law mandates the exact contracts that are required to be written down.

For example, Florida Statute 725.01 states that any contracts that promise to pay the debt of another must be in writing. These specific contracts require that both parties are in agreement with all the terms, alongside a promise to exchange valuables, goods, or services. Our West Palm Beach business contract attorneys can help determine what needs to be included in a written contract in order to make it legal and enforceable in the eyes of the court.

By Kelley Fulton Kaplan & Eller | Posted on July 8, 2019
« Filing for Bankruptcy in Florida
Florida Laws and Procedures for Foreclosures »