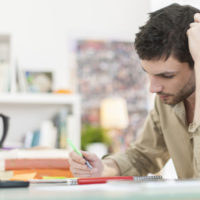 Many people believe that filing bankruptcy is grounds for discharging student debts. After all, credit card debt and car loans are all but forgotten when one is forced to declare bankruptcy. Yet, it’s not so easy when it comes to seeking  student loan forgiveness. As it stands now, filing for bankruptcy isn’t cause for wiping away student loans, unless a person can demonstrate undue hardship. However, doing so is very tricky. Undue hardship is determined by the courts using the “Brunner test,” which has some pretty strict standards. In rare circumstances, courts will use a test with less-strict standards to determine undue hardship, but a borrower seeking discharge simply can’t count on this.

In order for a borrower’s student debt to be deemed an undue hardship under the Brunner test, the borrower must show that he or she meets three standards.

There are plenty of cases that show the difficulty of meeting the Brunner test’s standards, but the one on many minds is Mark Tetzlaff’s (link to Supreme Court Denies Appeal on Student-Loan Erasure). The Florida Coastal School of Law graduate seems to fit what many would consider undue hardship, but the U.S. Supreme Court recently refused to hear his appeal to discharge his student loans, which total over $260,000. After attending law school, Tetzlaff was unable to pass the bar exam after several attempts. Since then, he has been living off of his mother’s social security, due to his struggles with depression, alcoholism, and minor criminal convictions. This was used as his reasoning for being unable to obtain a job. The U.S. Court of Appeals for the Seventh Circuit ruled that he didn’t meet the criteria for undue hardship under the Brunner test. The judges suspected that Mr. Tetzlaff had been faking the mental state which he claimed prevented him from getting a job.

What do these strict standards mean for struggling borrowers?

More than anything, it means that hiring a student loan attorney in West Palm Beach to handle your bankruptcy proceedings is all the more important. The White House has recently been pushing for reforms of the procedures for discharging student loans, but it’s unlikely that these standards will change in the near future.

Struggling borrowers with legitimate causes need to be smart in their approach. Getting student loans discharged is difficult, but by no means impossible. Arguing your case to meet the criteria of the Brunner test requires a seasoned bankruptcy attorney, like Kelley Fulton Kaplan & Eller. Contacting an attorney is the first step to relieving your financial burden.