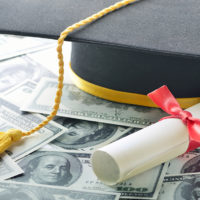 A 1995 University of South Florida graduate has recently garnered headlines for what can only be described as a unique approach to seeking discharge of approximately $60,000 in student loans. Ian Locklear, 44, is suing U.S. Department of Education Secretary John King Jr. for cancellation of the debts accumulated from his pursuit of a bachelor’s degree in interdisciplinary social sciences over 20 years ago.

A One of a Kind Argument

The former USF student has based his argument on the fact that he was wrongly granted the six Stafford loans, since he never graduated high school before attending the university. Back in 1990, when Locklear was just a junior in high school, he dropped out to attend USF after being awarded early acceptance. He still has yet to receive the equivalent of a high school diploma.

Locklear cites the Higher Educations Act of 1965 as the legal foundation for his demanded discharge, which states that student debt should be discharged if the school falsely determined the student’s ability to benefit from the program studied. The ability to benefit, defined under the Federal Family Education Loan Program (which disbursed the funds), requires that the student graduate from high school or achieve the equivalent of a high school diploma and pass an acceptable standardized test. In the event that either of these requirements are not met, the student must undergo remedial education, which Locklear did not.

This lawsuit is the latest of several attempts to achieve discharge of his student loans. He started the process in December 2010, when he attempted to file for discharge with his loan manager, the Texas Guaranteed Student Loan Corporation, citing inability to benefit. However, in January 2011, he was denied, as were his subsequent appeals to the Department of Education. His current suit insists the denial of those appeals was the result of reliance on incomplete university records.

While we are not sure how effective Locklear’s tactics will be, especially since he did benefit from his education when he was able to earn a degree, we definitely give him points for creativity. Achieving student loan discharge is no easy task, but an innovative approach might tilt the scales in his favor. In most cases, borrowers must meet the extremely strict standards of undue hardship to even be considered for discharge. Unfortunately for Locklear, who filed for bankruptcy in 2008, it is highly unlikely that he will be granted discharge with this new argument.

If student loan debt has taken a toll on your life, you should at least explore your options. Though student debt presents a tricky situation in bankruptcy, it is not impossible to eliminate. Contact a West Palm Beach bankruptcy attorney at Kelley Fulton Kaplan & Eller today to determine what course of action is the best fit for your situation.