Navigating a Breach of Contract 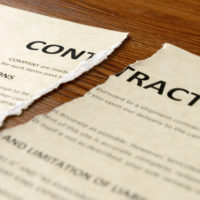 Every business owner will undoubtedly encounter contracts, and where there are legal agreements, there is the chance that those contracts will be breached. However, what is unclear to many is what happens after this occurs. If it does, a West Palm Beach business attorney should be consulted to advise the business owner on the best course of action. That said, being knowledgeable about how to handle this kind of situation will certainly give the wronged party the upper hand. Therefore, we have outlined the steps which should be taken should this issue arise so that business owners can be better prepared.

Before moving forward with any actions after a contract has been breached, it is important to understand what violations are likely to merit the recovery of damages. While the law recognizes any failure to deliver on a contractual requirement as a breach, actually recovering damages is trickier. An infringement will typically only stand up in court if it can be deemed material, meaning the contract expressed clearly that any failure to deliver on the obligations outlined in the agreement would lead to consequences. Breaches on contracts which don’t mark the action as essential would be ruled immaterial, and winning a suit over them would be unlikely.

Steps to Take After a Breach

As with most business disputes, the first step to take after a contract is broken is usually to attempt to resolve the issue outside of the courtroom. Of course, this is not always possible, at which point the next course of action will likely be for the party who didn’t violate the contract to file a lawsuit or seek out a mediator. With the former option, there are four possible outcomes that can result from the suit: rewarding of damages, specific performance, cancellation/restitution, or no relief if the breach is deemed immaterial.

If you are dealing with a breach of contract, a West Palm Beach business attorney is here to help. Call our office today to get your questions answered and work towards the retribution you deserve.

By Kelley Fulton Kaplan & Eller | Posted on January 18, 2017
« 3 Questions to Ask Before Selling a Business
The Basics of Commercial Leases »