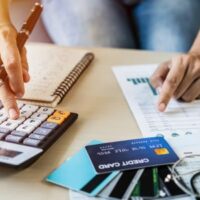 However, that isn’t always the case. Today, many creditors don’t have the original paperwork that you may have signed when you initially applied for and took out the debt. Creditors get around the necessity of having your original credit card agreement by using what is known as open account and account stated.

If you are sued on a credit card debt, don’t be surprised to find these two causes of action alleged against you, even though there is no sign of the actual credit agreement that you signed.

Open account allows someone to sue based solely on the books and records of the person (or the company) that is owed the debt, even if those records don’t include the original credit agreement.

Open account merely says that there was an account opened, or services provided for, the debtor, and that the debt remains unresolved. As such, the plaintiff only has to show the debt itself, or the providing of the services—it does not need to substantiate proof of the terms of the original contract.

Account stated is very similar, but unlike with open account, the creditor often does not need to show an itemization of the amounts that were charged.

All account stated requires, is an agreement that there is a balance owed (a debt), and that it is correct, and that there was a promise to pay back that balance. Because that promise can be express or implied, that means that once again, the creditor does not have to have the original signed credit agreement.

Generally, so long as a creditor can show that it sent you a credit statement, or when it asked to be paid back, and it sent you a statement of charges, you didn’t object (and realistically, people usually don’t object to a credit card statement that’s otherwise accurate), that’s all the creditor needs.

There are Still Defenses

These two theories—open account and account stated—may allow the creditor to sue without a credit card statement. However, they may not entitle the creditor to interest, fees or other penalties, that would require presenting the original credit card agreement.

Call the West Palm Beach bankruptcy lawyers at Kelley Fulton Kaplan & Eller at 561-264-6850 for help if you are being sued on any kind of debt.

By Kelley Fulton Kaplan & Eller | Posted on January 26, 2022
« Can Debt From A Bail Bond Be Discharged In Bankruptcy?
Are Unemployment Overpayments Dischargeable In Bankruptcy? »