Can Debt From A Bail Bond Be Discharged In Bankruptcy? 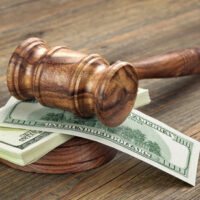 Although it is not a very common occurrence, it does happen that people owe money from a bail bond. Is this debt dischargeable in bankruptcy?

What is a Bail Bond?

If you are charged with a crime, you have a right to be set free while you are awaiting trial. However, the state has a right to require you to pay money to ensure that you will show up again to court later if you have to. If you show up to court when you are supposed to, you (or whoever put the money up) get paid your money back. If you don’t show up, the State keeps the money that you put up.

This is called a bond. The problem for many defendants is that bond amounts can be very high—more than most people can afford. So, bail bondsmen can help.

A bail bondsman puts up the money that you owe to the State for you, so that you can go free while awaiting trial. In return, you promise to pay the bondsman back if you don’t show up for court (if you do show up, and your bond money is returned, the bondsman keeps a percentage of the funds as its fee). You also may have to give something to the bondsman that acts as collateral—say, a house, or property.

As you may have figured out, if you don’t show up for trial, or a scheduled criminal court appearance, you now owe the bondsman the money that it put up on your behalf that the state has taken because you didn’t show up.

The bondsman can also go after anybody who co-signed the bond on your behalf and guaranteed it, and the bondsman can take any property that you pledged to put up as collateral.

Bankruptcy will discharge money owed on a bond—but there are some exceptions.

If you pledged property for the bond, the money that is owed may be treated like a secured debt, such as a mortgage or a car payment. That means that the bondsman could have the ability to foreclose on or take whatever property was pledged.

Any money you owe after the property is sold would be wiped out in bankruptcy. In other words, if the property that was sold to pay the bondsman does not completely cover the amount of the bond, you will not owe any additional money assuming you get your bankruptcy discharge.

Note that some bondsmen are sloppy with paperwork, and may claim a lien, when they don’t actually have a valid, legal lien. This would make the entirety of the bond completely dischargeable.

Like any other debt, you could find that the bond amount is not dischargeable if you got it by fraud, lying, or if you knew you were going to wipe it out in bankruptcy at the time the bond was put up for you.

Call the West Palm Beach bankruptcy lawyers at Kelley Fulton Kaplan & Eller at 561-264-6850 to help see what debts are dischargeable in bankruptcy and to help you get your fresh financial start.

By Kelley Fulton Kaplan & Eller | Posted on January 24, 2022
« What’s A Critical Vendor In A Chapter 11 Case?
How You Can Be Sued For A Credit Card Debt Without A Credit Agreement »