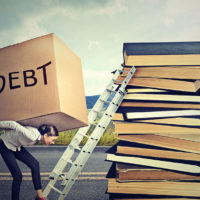 Wiping out student loan debt in bankruptcy has been nearly impossible for Americans since federal law excluded most student loans from being eligible for discharge in the 1970s. The only viable action a debtor can take to evade these harsh regulations is to claim that repaying the incurred student loan debt would result in “undue hardship.” This decision is based fully on the opinion of the overseeing judges, who have rarely allowed a debtor to become relinquished of his student loan debt.

Though this has been the norm for the previous half century, a current Boston federal court case has the opportunity to set a new precedent regarding the discharge of student loans in bankruptcy.

Robert Murphy, an unemployed 65-year-old with six figures of student loan debt from his children’s tuition costs, has appealed his way to the Boston federal court. Murphy’s main argument is that after being laid off from his executive-level job, he would still not have been able to pay back his student loan debt if he found a new job that paid $50,000 annually. In fact, if he did secure a new job, his debt would continue to incur interest and balloon to over $500,000 while he was paying back what he owed.

To the laymen, Mr. Murphy’s case would qualify as undue hardship, though we can only wait and see if the overseeing judicial members feel the same. This case may eventually reach the Supreme Court, which would mark the first time that this issue has been taken to such a high judicial arena.

Stay up to date with the Kelley Fulton Kaplan & Eller blog for crucial updates on this high-profile case that may have a profound impact on so many Americans. If you are battling student loan debt and are looking for a way to deal with your increasing financial troubles, Kelley Fulton Kaplan & Eller would welcome the opportunity to meet. We invite you to schedule an initial consultation with an experienced bankruptcy lawyer in West Palm Beach, and let our team of attorneys get acquainted with the specifics of your case today.

By Kelley Fulton Kaplan & Eller | Posted on December 18, 2015
« Your company bonus in a Chapter 7 bankruptcy
5 Steps for using credit responsively for holiday shopping »