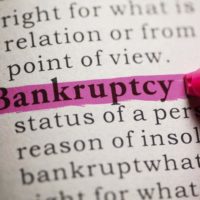 If you are not familiar with the process of bankruptcy, then you may find yourself confused by some of the terminology that’s commonly used. The U.S. Courts website offers a complete glossary of bankruptcy terms, from the common to the more esoteric.

Here are some terms that you should know and understand when considering filing for bankruptcy :

Many people have misconceptions about the word itself. What is bankruptcy? It’s important to know that bankruptcy defines a legal procedure by which the debt problems of individuals (personal bankruptcy) and businesses (commercial bankruptcy) may be dealt with in manner designed to rectify such problems. In the United States the Bankruptcy Code is contained in the chapters of title 11.

There are three primary kinds of bankruptcy that will be found under the Bankruptcy Code of the U.S. These are known as Chapter 7, Chapter 11, and Chapter 13 bankruptcies. Each involves a specific manner of dealing with debt. Under Chapter 7 most debt is discharged, that is forgiven or dismissed, while if one files under Chapter 13, the debtor is given from three to five years to repay much of their debt, while some is discharged.

In order to file for Chapter 7, you must pass a means test. The means test compares the debtor’s average income for the past six months, which is annualized, to the median income for households of the same size in the state where the debtor resides. If the debtor’s income is less than or equal to the state median, then they may file under Chapter 7. However, if they do not pass the means test, they may ask the court to investigate their situation further to determine if they still may qualify for Chapter 7 or if they can, instead, file for Chapter 13.

Businesses usually employ Chapter 11 bankruptcy. This procedure allows companies to reorganize their debt and the manner in which they do business. Chapter 11 is designed to give businesses the chance to regain their fiscal footing, pay their debts, and become liquid. Individuals may also file a Chapter 11 case in certain circumstances.

These common terms, debtor, creditor, and trustee, define relationships in a bankruptcy proceeding. The debtor, who is the person who owes money and is requesting that their debt be forgiven, files their bankruptcy petition with the court. The court appoints a trustee, whose job it is to oversee the bankruptcy proceedings. The trustee is in charge of receiving and evaluating all evidence, investigating any abnormalities, informing creditors of the proceedings, and determining the outcome of the bankruptcy.

The creditors are those to whom the debtor owes money. They may attend a creditor meeting, which is often referred to as a 341 meeting. At this meeting, which the debtor also attends and which is overseen by the trustee, creditors may ask questions of the creditor, their fiscal situation, and the bankruptcy. After the meeting, the trustee reviews all aspects of the case and makes their decision concerning the bankruptcy.

The bankruptcy petition is the formal document filed by the debtor with the court. The petition contains a wealth of information, including all debts owed, assets held by the debtor, details concerning their income, tax returns, and more. When the debtor files their petition, the trustee files an automatic stay, which informs all of the creditors named that a bankruptcy claim has been opened and that during the bankruptcy process they may no longer contact the debtor regarding the money they are owed.

When one files a bankruptcy petition, there are certain assets that are exempt from creditors. When an asset, which is something of value owned or possessed by the debtor, is exempt that means that a creditor may not take it for payment of a debt. Many personal belongings are exempt, and often a debtor’s home and primary motor vehicle are also classified as such.

Secured debts are non-dischargeable under bankruptcy. That means that if bankruptcy is granted that the debtor still has to meet the loan agreement to keep the asset. A debtor can surrender the asset if he/she does not desire to retain the asset. An unsecured debt, that is debt that is awarded without any collateral, such as credit card deb, is discharged, or forgiven.

When filing for bankruptcy it is important that you understand each step of the process, know the terms that are commonly used, and that you proceed in a manner that offers you the best chance of attaining your desired outcome. If you are going to file for bankruptcy, be sure to utilize the services of a bankruptcy lawyer who can answer all of your questions and meet every one of your needs. For experienced and knowledgeable bankruptcy services contact The Law Office of Kelley Fulton Kaplan & Eller today at 561-264-6850. We can help.

By Kelley Fulton Kaplan & Eller | Posted on October 9, 2014
« 5 Things Not To Do Before Filing for Bankruptcy
5 Ways to Rebuild Credit After Bankruptcy »