Affirmative Defenses to a Breach of Contract 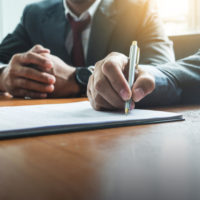 As a common argument against breach of contract lawsuits, an affirmative defense requires the Defendant to prove his explanation if the case goes to trial. This widespread type of defense does not need to dispute the Plaintiff’s primary claims, only to present the extenuating circumstances that dismiss the claim. For example, if a business was contracted to build a home, but the homeowner was unhappy with the quality of materials, an affirmative defense would argue that there was no stipulation in the contract that discussed the quality of the materials to be used.

Our West Palm Beach business litigation attorneys are here to expand on the subject of affirmative defenses to a breach of contract claim.

1. Failure to Produce a Written Contract:

Sometimes, the other side can protest that an oral agreement is grounds for a breach of contract. Florida’s Statute of Frauds, Section 725.01 states that “the statute of frauds was enacted to prevent fraud and the enforcement of claims based on loose verbal statements made faulty by the lapse of time.” There are certain categories of verbal contracts that are not legally binding, for example those that cannot be performed in less than a year. Those that must be written are:

If both parties did not come to a final agreement on an essential element, such as the contract’s lifespan, or conditions of the contract were left ambiguous, the defendant can argue that the contract is indefinite to avoid a breach of contract suit.

A defense can be made if there was an error pertaining to a significant specification within the contract, which then voids the agreement. For example, a contractor and a homeowner both thought that the house was going to be finished in March 2019, yet the contract said April 2019. If the defendant can prove that a mutual mistake was made, such as the wrong completion date, this would be grounds for a contract mistake defense, which could render a contract void or voidable.

If there is proof of a lack of mental capacity at the time the contract was signed, such as a minor not understanding what he was agreeing to, there is the possibility for the agreement to be nullified. Most of the defendants that succeed with this type of defense are minors or those with mental incapacities.

If someone induced another party to sign a contract using incorrect information or immoral persuasion techniques, the contract will not be enforced. Additionally, the agreement will be voided if a trusted person of the signee pressured him to sign because of an undisclosed benefit.

If one party holds more power than the other and takes advantage of this imbalance by forcing unjust conditions, clauses, or waivers to be signed by the opposite party, the contract can be claimed as unconscionable.

For those who are defending themselves against a breach of contract lawsuit, the court allows for multiple alternative affirmative defenses to be used. Nevertheless, those being sued should consult with our expert West Palm Beach business litigation attorneys to develop and argue a sound defense to protect themselves. To schedule a consultation today, contact Kelley Fulton Kaplan & Eller.