What Is Wage Garnishment And How Do I Stop It? 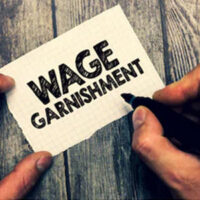 How a Wage Garnishment is Put in Place

A wage garnishment is an order put in by a creditor to take a portion of your wages directly from your employer. In other words, a payment amount is withdrawn from your paycheck by your employer before it even reaches you. That money that is taken out is sent by your employer directly to the creditor.

In most cases, a creditor cannot garnish your wages until after you have had a judgment entered against you in court. After the judgment is entered, you will be sent or served a separate motion where the creditor requests that the court enter a wage garnishment order.

If you get an attorney and fight a collections lawsuit, or you settle the case, you can usually avoid a garnishment.

There are other ways to avoid a garnishment, even if a judgment is entered against you. Just like there are exemptions in bankruptcy law, there are also exemptions to wage garnishment that you can file in court. One such exemption is the head of household exemption, which prohibits wages being taken if you make under a certain dollar figure and you care for or provide for dependents.

When the creditor wants to have your wages garnished, you can schedule a hearing with the judge, and bring the documentation needed to show that you make under the amount stated in the law to have a wage garnishment put into place.

Once the wage order is in place, approved, and if you don’t challenge it, the garnishment will continue perpetually until the debt is paid off.

There are some cases where a garnishment can be entered against you, without a lawsuit, or court hearing. For example, creditors can garnish wages for back owed student loans, some income taxes, or child support.

The good news is that when you file a bankruptcy, an automatic stay goes into effect. That stay will end the garnishment. If your garnishment is the result of a dischargeable debt, and you get your bankruptcy discharge or you enter into a Chapter 13 plan, the garnishment will never return, and you will be paid your entire wages from your employer once again.

Additionally, the wage garnishment will never return, if you complete your bankruptcy. Contrast this to filing an exemption, outside of bankruptcy. Even if the court grants your exemption, if in the future you make more money, the creditor can always try again for a new garnishment later on.

Call the West Palm Beach bankruptcy lawyers at Kelley Fulton Kaplan & Eller at 561-264-6850 for a consultation to answer your questions if you are being harassed by creditors, and are looking for some relief.

By Kelley Fulton Kaplan & Eller | Posted on November 10, 2021
« How Florida’s Family Laws Can Help Your Bankruptcy Case
What Are Legal And Equitable Titles, And How Do They Affect My Bankruptcy? »