Tying the Knot While in Debt 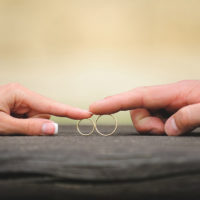 According to the IDFA (Institute for Divorce Financial Analysts), 22 percent of all divorces are are a direct result of money troubles. Given that statistic, it is reasonable to assume that couples entering into a marriage with at least one partner already in debt will have more struggles than those who are debt-free.

Financial pressures will eventually become marriage issues, adding significant stress to a relationship. In a study conducted by SunTrust bank, 35 percent of people reported that the main cause for emotional strain in their relationship was money. With that being said, it is important to address debt before getting married, both for the sake of the relationship and the financial future of both parties.

Solving debt issues may become harder once partners are married. For example, filing for bankruptcy when a person is single can help alleviate some of the debt and offer a fresh start. Chapter 7 bankruptcy relief may be harder to qualify for as a married filer, since the income of the non-filing spouse must be included in the means test, even if the spouse is not filing. Chapter 13 relief may be easier to obtain as a married filer in a higher income bracket. With this method, the debtor creates a plan to repay debts using future income rather than liquidating debts with his or her assets. However, the non-filing spouse’s income must be used in calculating the monthly plan payment.

Financial Planning Before The Wedding

Before getting married, it is crucial to have a serious talk about money and existing debts. Forty-seven percent of couples say that they each have different ideas and habits of saving and spending, so address these differences early on and determine a budgeting plan. In order to ensure your financial future is as positive as your romantic future, try to arrive at a consensus when it comes to your spending habits. You might even consider discussing this topic with a financial planner, or if your debts are significant, an experienced bankruptcy attorney. Trust us, you will both be much happier on your walk down the aisle knowing that you are on the same page financially.

If bankruptcy may be an option for you or your significant other, make time to speak with a bankruptcy attorney sooner rather than later. Your attorney can show you the options available to you, and advise you on the best course of action for your personal situation. You will be on your way to a brighter future before you know it.

By Kelley Fulton Kaplan & Eller | Posted on September 23, 2016
« Defining Exempt Property in Chapter 7 Bankruptcy
How to Complete a Statement of Intentions Form »