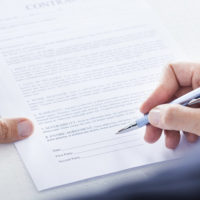 In a Chapter 7 bankruptcy, a debtor’s non-exempt, unsecured assets are sold and converted to cash. The proceeds are then used to pay the costs of administering the bankruptcy case and to pay off the debtor’s creditors, to the extent possible.

In the case of secured claims, creditors can proceed against the debtor’s property if they have a mortgage, lien, or other “security interest” in the property. If the debtor wants to keep property that would otherwise be taken by a secured creditor, the debtor may decide to enter into a reaffirmation agreement with the creditor. However, in Florida, this should not be done without first talking with an experienced  West Palm Beach bankruptcy attorney.

A reaffirmation agreement is a contract between the debtor and one of his or her creditors. It is a serious financial decision that requires important considerations and procedures in order to be approved by the bankruptcy court.

In signing a reaffirmation agreement, the debtor is promising to continue to pay a particular debt either under its original terms or under modified terms negotiated during the debtor’s bankruptcy.

In the typical reaffirmation agreement, the debtor is asked to provide a description of the original agreement being reaffirmed, the total amount being reaffirmed (including the unpaid principal, interest, as well as fees and costs), the interest rate, monthly payment, asset description, market value of the property, and whether the debtor has an attorney.

The agreement also asks for information on the debtor’s current income and expenses. It also questions whether reaffirming the debt will create an undue hardship on the debtor or the debtor’s dependents. This is because the debtor must have the means to pay for any debt that is being reaffirmed.

Court Approval Is Required For All Reaffirmation Agreements

Reaffirmation agreements musts be completed and filed before the debtor’s bankruptcy is discharged. Since the typical Chapter 7 case usually is completed in 3 to 6 months, any reaffirmations of debt must be completed within this time frame because a debt cannot be reaffirmed after discharge.

If the bankruptcy court grants the debtor’s request for approval of the reaffirmation agreement, the agreement is declared binding and enforceable. If the debtor stops paying on the debt, the creditor can resume collection efforts because the bankruptcy discharge does not protect a debtor who defaults on a reaffirmed loan.

Reasons For Signing (Or Not Signing) A Reaffirmation Agreement

A reaffirmation is a legally binding document. By reaffirming the debt indicated in the agreement, the debtor is also agreeing that this pre-bankruptcy debt will not be discharged along with the debtor’s other debts when the bankruptcy court issues the debtor’s Chapter 7 discharge.

Reasons to reaffirm a debt may include the following:

– The property is essential and the debtor has no ability to get another one for a cheaper amount (such as car for driving to work);

– The debtor needs to keep the property and the lender will not agree to take a reduced amount for payments;

– The debtor has the ability to bring the loan payment current and keep current on the loan because other debts will be discharged in the bankruptcy;

– The creditor is promising to do something in return for the debtor (such as modifying the original loan terms, either by reducing payments, lowering the interest rate, or reducing the principal owed); or

– The debtor needs or wants to protect a co-borrower or guarantor of the loan.

There are also several reasons to not reaffirm a debt, such as if:

– The debt is totally unsecured by any property;

– The debtor is not totally committed to keeping the property and is willing to give it back;

– The debtor is unlikely to be able to make the necessary payments to bring the loan current and keep it current in the future; or

– The creditor is threatening the debtor in some way.

Reaffirming a debt is a serious financial matter. A reaffirmation agreement should not be entered into lightly and without great thought. If you are considering signing a reaffirmation agreement or need other bankruptcy-related legal assistance, contact the experienced West Palm Beach bankruptcy attorneys at the Law Office of Kelley Fulton Kaplan & Eller at 561-264-6850. We can help.