How to Handle a Forced Bankruptcy 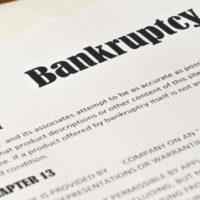 Typically, filing for bankruptcy is a decision a business owner makes after a great deal of deliberation. However, this decision is not always the owner’s to make. If a business falls behind on payments to a creditor, but still holds assets that could be utilized to pay said debts — the lender can actually force the business into bankruptcy. This is called an involuntary bankruptcy.

How is the bankruptcy forced?

The only types of bankruptcies a business can be forced into are Chapter 7 and Chapter 11. This can be done one of two ways: a single creditor files a petition for involuntary bankruptcy, or a group of three or more creditors forms to force the bankruptcy. The former is only an option for businesses with fewer than 12 creditors, while the latter is reserved for those with 12 or more for which no less than $14,425 is owed. When this petition is filed, the filer(s) will determine whether Chapter 7 or 11 is appropriate, and if approved, the bankruptcy process will commence.

There are many differences between involuntary and voluntary. First, the business will still be able to operate as normal after the filing, until the bankruptcy court enters an order for “relief,” which isn’t the case for voluntary filings. Second, the company has two options: to consent to the filing and proceed with the process (then the court will order “relief”) or contest the petition. The company only has 21 days to oppose the petition, and if it elects to do so, litigation will soon follow. If the involuntary petition is dismissed or deemed to be filed in bad faith by the bankruptcy court, the business may be able to recover damages from the petitioning creditor(s). However, in the event that the petition is accepted, the help of a West Palm Beach bankruptcy attorney will be necessary once the Chapter 7 or 11 bankruptcy process begins.

While rare, involuntary bankruptcies are a very real threat that businesses need to be informed about. If you have questions about handling this unique situation, schedule a consultation with a West Palm Beach bankruptcy attorney at Kelley Fulton Kaplan & Eller today.