Americans Are More In Debt Than Ever 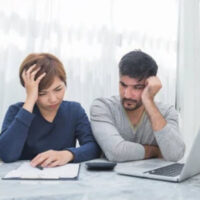 It looks like, for now, COVID is subsiding a little bit, and as commerce starts to open, a lot of us are back to work again. Except there is one major problem hiding in American households: We, as a country, are farther in debt than we have ever been.

Why All the Debt?

Part of this may be because of debt that people had to use during shutdowns, debt that was incurred for necessary living expenses. Part of the problem could be that people now have the ability to travel again, and as stores started to open a few months ago, many people started to spend money again—money they may not have been able to afford.

Another cause may be that during shutdowns, people didn’t have things to spend money on—so they spent whatever money they had paying off debt. Increased employment benefits and economic relief also helped people during the depths of the pandemic. That phase, however, is now over.

Household debt in America climbed to over $15 trillion from July to September this year. Credit card debt rose $17 billion, and mortgage debt rose by $230 billion.

The increased mortgage debt is caused by the increased cost of homes, with supply shortages throughout the country. Foreclosure rates are lower, with fewer people behind on mortgage payments than they were a year ago–although that may simply be a delay, until the foreclosure cases can be filed by banks and lenders. Car loans also increased by $28 billion.

Some of the debt may be caused by potentially positive indicators. For example, with labor shortages, wages have gone up. With higher wages, people spend more (and charge more).

But a more negative indicator is inflation—everything costs more than it ever has. Demand for scarce products has driven prices skyward. Businesses, faced with higher costs, are passing those expenses on to consumers.

Forbearances that were imposed during the pandemic have largely ended. Many people may be putting rent or mortgage payments on credit cards, just to get by.

Is Bankruptcy a Good Idea?

Whether you should file for bankruptcy now is an individual question that you should discuss with your bankruptcy attorney. If you are unemployed, or earning significantly less than you did before the pandemic, it may be an ideal time to get rid of the credit card debt that you may have compiled during COVID related shutdowns.

If you are behind in mortgage payments, filing bankruptcy early may help you—the less you owe at the time you file, the more likely it is that you could qualify for a plan to get your mortgage current.

Bankruptcy can also help you catch up on mortgage payments or car loans, especially in Chapter 13 bankruptcies.

Call the West Palm Beach bankruptcy lawyers at Kelley Fulton Kaplan & Eller at 561-264-6850 if you are having financial problems.

By Kelley, Fulton & Kaplan | Posted on February 2, 2022
« What Is The U.S. Trustee?
Discharging Personal Guarantees In Bankruptcy »